This recipe for one of Thailand's favorite marketplace sweets comes from Kasma Loha-unchit's award winning cookbook It Rains Fishes. If you've ever tried this sweet (or kanom in Thai) then you'll know how delicious it is especially when served straignt from the pan after a busy day at the market.

A vendor at a floating market pours out the kanom krok mixture into a special Kanom Krok Pan - available in our cookware section.

If using canned coconut milk, spoon into a small saucepan 1 3/4 cup of the creamiest part from the top of three cans of coconut milk. Heat just enough to melt and smooth out the lumps. Add sugar and stir to dissolve. Allow to cool before mixing in 2 1/2 tbs. of tapioca or arrowroot flour. Stir until smooth. Set aside.

Combine the remaining coconut milk from the cans and stir until smooth, heating if necessary to melt the coagulated parts. Allow to cool.

Grind the uncooked white rice in a food mill or clean coffee grinder as finely as possible. Do the same with the shredded coconut. Combine the two with the rice flour, salt and coconut milk. Stir and mix until well blended and smooth.

Heat a well-seasoned kanom krok griddle (or substitute with an Ebelskiver pancake griddle) on the stove, in a hot oven or over a small round barbecue kettle with medium-hot charcoals. When the griddle is hot, brush the surface indentations with peanut or corn oil. Wait a few seconds before spooning the salty rice mixture into each indentation to about two-thirds full. The batter should sizzle when it hits the hot metal. (If you have a teakettle with a spout, you may find it helpful as a container from which to pour the rice batter onto the griddle.)

Before the batter sets, add a dab of the sweet coconut cream mixture over the top to fill and sprinkle the center of each cake with a little bit of one of the toppings, or leave plain. Cover with a round lid and allow to cook for a few minutes, or until the pancakes are firm and crispy brown on the bottom. Remove gently with a rounded spoon. Re-grease the griddle before making the next batch. Because rice flour tends to settle, stir the coconut mixture well before pouring onto the griddle. Serve warm.

How to Season Your New Cast Iron Kanom Krok Pan

Try these other delicious recipes:

In Scandinavia there is a dessert similar to the Kanom Krok, referred to as Ebelskiver (aebleskiver). Ebelskiver is prepared with a sweet pancake batter of flour, eggs, butter and milk. Cooked until partially set, the cakes are rotated inside the pan with a knitting needle (or similar tool) until the batter is baked uniformly and the balls are crisp and brown. These pancake-dumplings are especially popular in Denmark at Christmas time.

The Japanese have a savory snack called Takoyaki which is cooked in a square cast iron pan with indentations. These Japanese dumpling are made of with a batter which includes diced octopus.

In Thailand, kanom krok is prepared in a pan similar to the Ebelskiver pan but with smaller shallower indentations. The Thai version features a tropical batter made with coconut milk, sugar and ground rice. These sweet and savory, custardy bite-sized hotcakes are popularly served at breakfast time by push-cart vendors throughout Thailand. Served both plain and with filling these can include scallions, pumpkin, taro, corn and cilantro. Kanom krok is especially delicious when hot with a soft creamy center and extra crispy edges.

Kanom krok pans (gatah kanom krok) can also be made of terra-cotta with tiny lids covering each kanom, but apparently it is more difficult to cook kanom krok in this type of pan. Another type of khanom krok, besides sweet dessert, is called hoi tod kanom krok, a crispy mussel pancake with bean sprouts. The kanom krok pan is usually placed over hot coals on a round grill. At home the heavy cast iron pan may be placed over a gas flame or electric hotplate.

Perhaps the worldwide use of this unique pan begins in the ancient city of Ayuthaya, former capital of the kingdom of Siam (Thailand). An international port-of-call, particularly in the reign of King Narai (1657-1688), the Danish, the Japanese and many other nations courted the royal court to establish colonial relationship without success. King Narai's palace kitchen was famous for incorporating foriegn ingredients into the royal menu, especially regarding desserts. Some refer to this as the golden era for kanom, because at this time eggs where introduced into Thai desserts by Lady Marie Pina de Guirmar, a Japanese-Portuguese wife of Constantine Phalkon. She adapted many Portuguese desserts using local ingredients. It was the first time eggs were used with traditional ingredients: flour, sugar, and coconut milk. (Source: "Thai Cuisine: Treasure and Art of the Land", p.102, Plan Motif Publishers, copyright 2001) 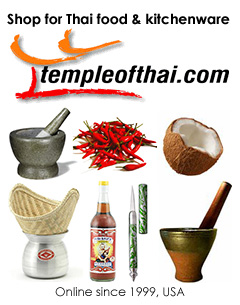