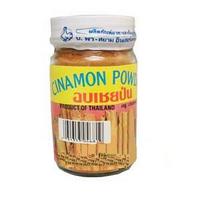 Cinnamon powder is made from cinnamon stick (ob-chuey in Thai or cinnamonum spp.) comes from the bark of a number of different species of trees in the laurel family. In Southeast Asia, the cassias tree is the commercial type of tree from which cinnamon is harvested. The bark tends to roll itself back up in a scoll-like shape, after being peeled from around the branch of the tree.

The most usual use of cinnamon in Thai cooking is as an ingredient in Palao (Chinese Five Spices Stew) or Masamam Curry. It is never used in Thai dessert recipes though.